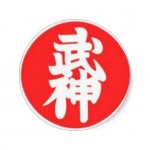 Bujinkan is dedicated to the study and promotion of traditional Japanese martial arts as taught by Grandmaster Masaaki Hatsumi, in Noda-shi Japan.

The Bujinkan martial art comprises nine different, but complimentary, martial arts traditions that encompass all aspects of personal combat and self protection skills. The training consists of unarmed and armed personal combat techniques, as taught in Japan. This martial art is truly martial in that it is centered on centuries old, combat-tested techniques. It’s not a sport martial art, nor are competitions between practitioners arranged.

While this sounds very serious, and indeed it is, Bujinkan is also about self-knowledge, improvement and living without fear.
As Hatsumi-sensei says, “…to become people that can live.”

I chose to train in Hatsumi-sensei’s Bujinkan arts in order to learn how to survive in the real world. On the surface, it may seem that we are engaged in those aspects of life that deal with physical dangers, whether they come from a physical assault or other parts of life that may cause physical harm. While this is very true, I also learnt something much more valuable.

“Life is not simply about staying alive, it is about living.”

Through Bujinkan we learn to overcome fears, doubts, and inhibitions and enjoy life without having the constant nagging fears that keep us from reaching our potential. Many would say that learning to disarm a sword wielding attacker has little to do with life in this modern age. However I feel that the confidence and skills needed to face an almost certain painful death are useful in our day to day dealings with the world.

“Overcoming our fears is necessary for growth and well being.”

It has been said, is it not a happy person that does not fear death? Our personal experiences in pursuing the warrior arts, tempered with our own moral and ethical guidelines, as well as intellectual and cultural pursuits help us to become a person that can live and enjoy life, rather than seeing our existence as one obstacle after another. We learn to avoid obstacles, recover easily from falls, and overcome insurmountable odds in
order to continue to live as we wish: happily and without fear.

What is the Bujinkan?

Masaaki Hatsumi of Noda City, Japan is the Soke (Grandmaster) of at least nine separate Japanese martial traditions (ryu-ha) passed to him by his personal teachers including the late Toshitsugu Takamatsu. The Bujinkan is the organization created by Hatsumi-soke to disseminate the teachings of the ryu-ha throughout the world.

The traceable development of these arts spans the last 1,000 years. The preservation of these traditions is a critical difference between Bujinkan arts and recently developed Japanese disciplines taught in the West, such as Karate-do, Aikido, and Judo.

The “do” arts were created largely after World War One and are derived from battlefield traditions. The meanings of “do” techniques are still rarely taught outside of Japan.

However, our Bujinkan education takes into explicit account battlefield and combat scenarios that are considered “bunkai” (possible applications), at best in most modern disciplines.

While recognizing change and modernization, Bujinkan training remains firmly rooted in the past. Rather than attempt to make old techniques into new, we learn form the old and seek the universal and lasting truths which have stood the test of time within the traditions which have been passed down. Alone, it doesn’t make Bujinkan better, only closer to the original warrior traditions.

The nine traditions of the Bujinkan are: